Yearning to Return to the Land of their Ancestors 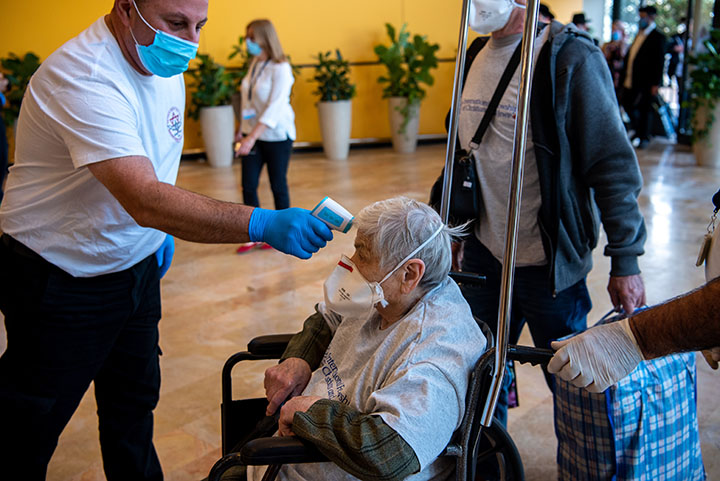 The Makarenko-Smirnova family Volodymyr, age 66; his wife Halyna, age 62; and Halyna’s mother Rakhil, age 89 made aliyah (immigrated to Israel) May 19, 2020, aboard the first Fellowship Freedom Flight since Israel’s borders reopened. Due to the COVID-19 pandemic, during their first two weeks in Israel, the family was quarantined in their apartment, rented for them by relatives, in the city of Holon.

The family began their new life in Israel and are now so blessed to be reunited with their daughter, her husband, and two grandchildren. Conditions in Ukraine were extremely difficult, and for years, the family yearned to make aliyah. Wanting to leave the terrible living conditions in the former Soviet Union (FSU), they also hoped to reunite with their children. Halyna explained that the greatest reason for making aliyah was 89-year old’s Rakhil’s dream to “return to the land of our ancestors.”

Rakhil Smirnova shared her story with us:

“I’m a Holocaust survivor. When World War II broke out, I was only 10 years old. In the autumn of 1941, my family and I were forced to flee from the town of Tschasov Jar in the Donetsk region of Ukraine. The day after my family fled, the Nazi invaders occupied the town. We fled the Donetsk region and settled in the town of Fergana in Uzbekistan. We then moved to Atbasar in Kazakhstan.

“As was the case with many of the Jews during that period, we were always on the verge of starvation. The locals weren’t eager to provide shelter to Jews, because of the fear that the Germans would find them and punish the ones that granted the shelter.

“Everything I remember from my childhood is fear. Fear of being found by Germans, fear for the life of my mother, fear for my father who had been drafted into the Soviet Army. I still cannot eat sheep’s meat. Even the smell of it makes me want to throw up. During the war, in order to stay alive, my mother was forced to boil dead animals and feed their flesh to me.

“More than 80 years have passed since then and I still didn’t manage to cope with the tragedy of the Jewish people.”

Rakhil’s story is sadly all too common. With COVID-19 taking hold in many FSU nations, the situation for Holocaust survivors is dire, and they desperately need your help. With no isolation measures in place in many of these countries, the pandemic is spreading quickly and is making their already desperate conditions even more grave. But you can make a difference today. Your donation can help rescue operations move forward.

Please don’t wait whatever you can spare will save the lives of Jewish people whose safety, security, and health is on the brink. These are God’s children and they need you.

Yearning to Return to the Land of their Ancestors