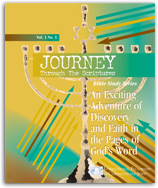 Journey Through The Scriptures

God’s audible call to Samuel marked the beginning of a new era in Israel. Up to this point, the primary revelation to the people had been through the priesthood.

But with Samuel’s call, God began a new day of revealing His word through prophets.

The nation’s weak spiritual condition, and the decadent nature of Eli’s high priesthood, are indicated by the fact that a word from God was "rare" in those days. So rare, in fact, that Samuel thought he was hearing Eli’s voice.

To his credit, Eli soon realized that the voice calling Samuel was God’s. Eli’s advice was very wise; "Here I am" is always the proper response to God’s call.

Although the nature of the prophecy Samuel received meant devastating judgment for Eli, he accepted it as the Lord’s will.

Meanwhile, Samuel continued to receive God’s message and spread it throughout all Israel, which recognized Samuel as a man of God.

Something to Think About

When God calls to us, it is our responsibility and privilege to answer, "Here I am." Although God does not speak to us audibly as He did to Samuel, His will is made clear to us in the pages of Scripture and in prayer. But sometimes we have a hard time hearing God’s voice because we allow other voices to interfere. Ask God to help you be sensitive and alert to His leading.