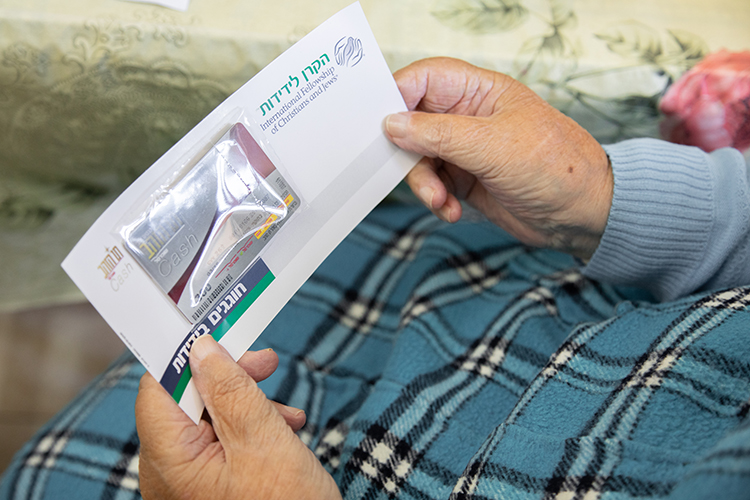 As we are nearing the end of the year, we still have so much to do to reach our goal and help as many people as possible. The Fellowship in Canada, through the assistance of people like you, provide monthly food cards to 10,370 elderly who don’t have enough food to eat people like Fredirika. Her story is both brave and sad, and unfortunately it is one we hear far too often.

Fredirika Bakaski was born 93 years ago in a small Hungarian village that was later claimed by Romania after World War II. She was the third of 5 children, with an older brother and sister and a younger brother and sister. The family was 1 of 6 in the community, representing about 35 Jews.

Life at that time was tough. Though her father owned a small store, business was slow and there was not always enough food to go around. Fredirika and her siblings often went hungry. Still, she remembers they were happy. And Fredirika was able to attend seven years of school before war broke out.

In 1944, at the age of 18, Fredirika and her family were captured and forced onto a livestock train with thousands of other Jews. They rode in overcrowded cars for 3 days without food, water or sanitation. The stench and the fear were un-maskable. The conditions were unfit for animals let alone humans.

Upon their arrival at Auschwitz, her mother, father and younger brother were told to exit left off the train to “shower.” That’s the last she ever saw of them. They were murdered that day in one of several gas chambers, their bodies burned to ash in ovens. 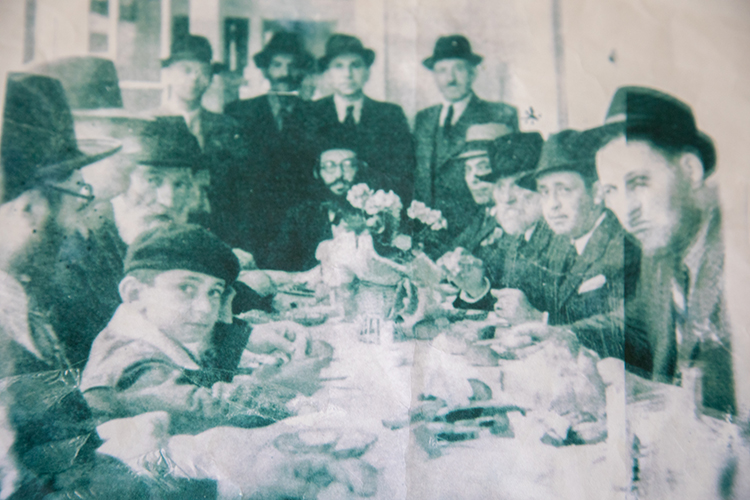 Fredirika motions to a faded old photograph, takes it in her hands and examines the faces in the faded snapshot. Men in traditional Jewish attire sit around a table. On the left she identifies her father and little brother. The image was taken shortly before their lives were stolen. It is her last fond memory of them.

Fredirika, her two sisters and eldest brother were told to exit right off the train toward the Auschwitz work camp. Weak from thirst, at the first sight of water—thought it was dirty and diseased— Fredirika drank all she could. Soon she fell severely ill and wasted away to 88 lbs. She remembers Nazi guards delivering daily threats of dragging her to the gas chamber where she would suffer the same horrific fate of her parents and young brother.

She managed to survive, but the conditions she was held in remained squalid and inhumane. Prisoners subsisted on one loaf of bread for every five people, along with boiled potatoes mixed with the slop the Nazis fed to cows.

Fredirika arrived in May and by October the Russian Army was closing in. The Nazis sent her and the remaining survivors from Auschwitz to Bergen-Belsen—another concentration camp. But with defeat imminent, the Nazis soon fled that camp as well, leaving prisoners like Fredirika to die.

One day, having had no sight or sound of her captors for days, Fredirika decided to walk the camp’s grounds. Upon leaving her bunk, she immediately came upon piles of dead bodies. She shielded her eyes with her hands but says the horrors of this sight will never leave her. As she recalls this scar of a memory, her voice fills with intense emotion.

To her relief, the British army would arrive close to a month later and liberate her, along with her sisters and the other survivors.

Fredirika was sick from typhoid and was given medical treatment. Many more suffering from typhoid, dysentery, malnutrition and other illnesses did not survive. Others died from over-eating once free. The quality and amount of food they received from their liberators was too much for their emaciated bodies to process.

With no concrete direction or plan from the British, Fredirika and her sisters hopped a series of trains that eventually took them to Budapest, Hungary where Jewish homes took them in for a few days to eat and rest. Then, they returned to Romania and the only home they had ever known.

Their home was still there but after the immense loss of both parents and both brothers—the eldest was separated at the Auschwitz work camp and never heard from again—it had become a shell of a home with little comfort.

As she recounts her experience, Fredirika is both frail and strong at the same time. Her eyes well up, yet she never sheds a tear. She rolls up the sleeve of her left arm to reveal a faded serial number tattoo, which now serves as an ever-present reminded of her journey. 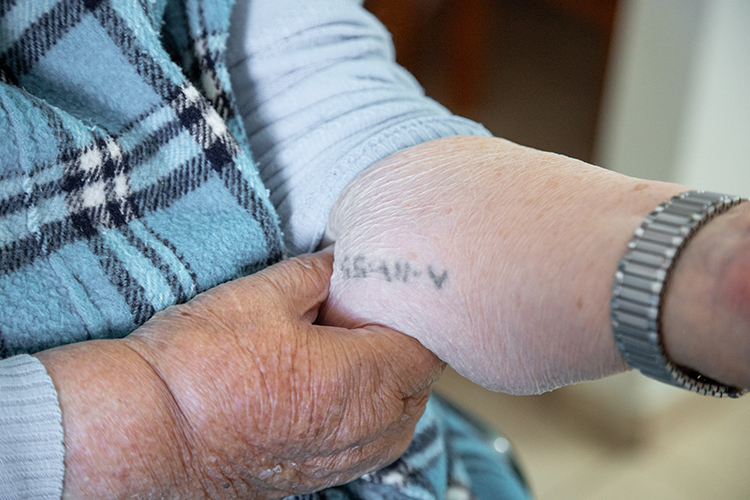 After the war, Fredirika married a soldier who survived the conflict but lost his wife and children. His brother married her older sister. The only male Jew from their village to return alive married her young sister. Fredirika’s husband opened a store, and they all settled into village life.

Sadly, more hardship was to come: six years after the war, Communists came and took everything away from them. Finally, in 1955 they decided to make Aliyah to Israel. Despite their desire, they discovered they were too poor to make the journey, and after scrimping and saving, finally arrived in Israel in 1963. She took a job in a confectionary factory; he in construction.

When her husband died in the late 90s, Fredirika was left alone. Now, she finds herself elderly and sick, hungry once again and having to cut corners to get by. She spends her days in a small, sparsely decorated, but neat and tidy apartment. She often needs to make the choice over which to purchase: food or her medicine.

She does not have much, but she is a survivor in every sense of the word.

Thankfully, she has the support of The Fellowship and its family of donors. Through them, she receives grocery cards to use at her local supermarket. This seemingly small gift allows her to ensure she has both the much needed medical care needs and food to eat she doesn’t have to choose.

We could not do this without the support of people like you. But we are shy of our goal and are asking that you help with a gift that will allow us to reach all people in need. Won’t you donate today?