Most of us have read about the Holocaust in history books or learned about it through television. But for tens of thousands of Holocaust survivors, the effects of Nazi cruelty linger on.

While the Nazis bear responsibility for the Holocaust, history tells us that hundreds of thousands of Jews might have lived if the world had responded quickly and decisively to the Nazi's oppressive laws and hateful attacks, which ultimately led to the death of six million Jews.

After the fall of Hitler's evil regime, the founding of a Jewish state in the Middle East began to seem more and more like a real possibility. In anticipation, hundreds of thousands of Jews made their way from the war-ravaged countries of Europe and Russia to new life in the Holy Land. This number, of course, increased exponentially following the founding of the modern state of Israel in 1948.

Today, there still are hundreds of thousands of Holocaust survivors living worldwide, a quarter million of them in Israel. I thank God that we have been blessed to experience the prophetic return of the Jews to Israel and that the Jewish state was there to provide refuge to those who so narrowly escaped the Nazi death machine!

But there is another side to the story of these people, who are now well advanced in age. As shocking as it may seem, today nearly a third of the Holocaust survivors in Israel live well below the poverty line. The need to combat terrorism and provide for a strong national defense has led to a critical shortage of Israeli government funds available for social programs.

It is almost too painful to contemplate – having survived untold brutality and deprivation early in their lives, in their old age thousands of these men and women now are hungry, unable to afford medicine to treat chronic ailments, and forced to live without life’s basic necessities.

But there is hope for these people who were once abandoned by their fellow man. The Fellowship's Guardians of Israel program funds hundreds of projects across Israel that assist poor, elderly Jews by providing them with hot meals, home care, basic medicine and travel to and from doctors' appointments, and other essentials.

Your donation to Guardians of Israel today will ensure that elderly Holocaust survivors in Israel will be supplied with the basic essentials of life, so they can live with dignity in their old age. Sixty years ago the world stood by as many Jews suffered. We cannot stand by again today. Please give today to help Guardians of Israel ease the suffering of elderly Holocaust survivors in Israel. After what they have been through, they deserve no less. 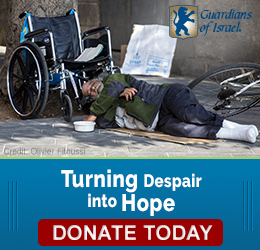